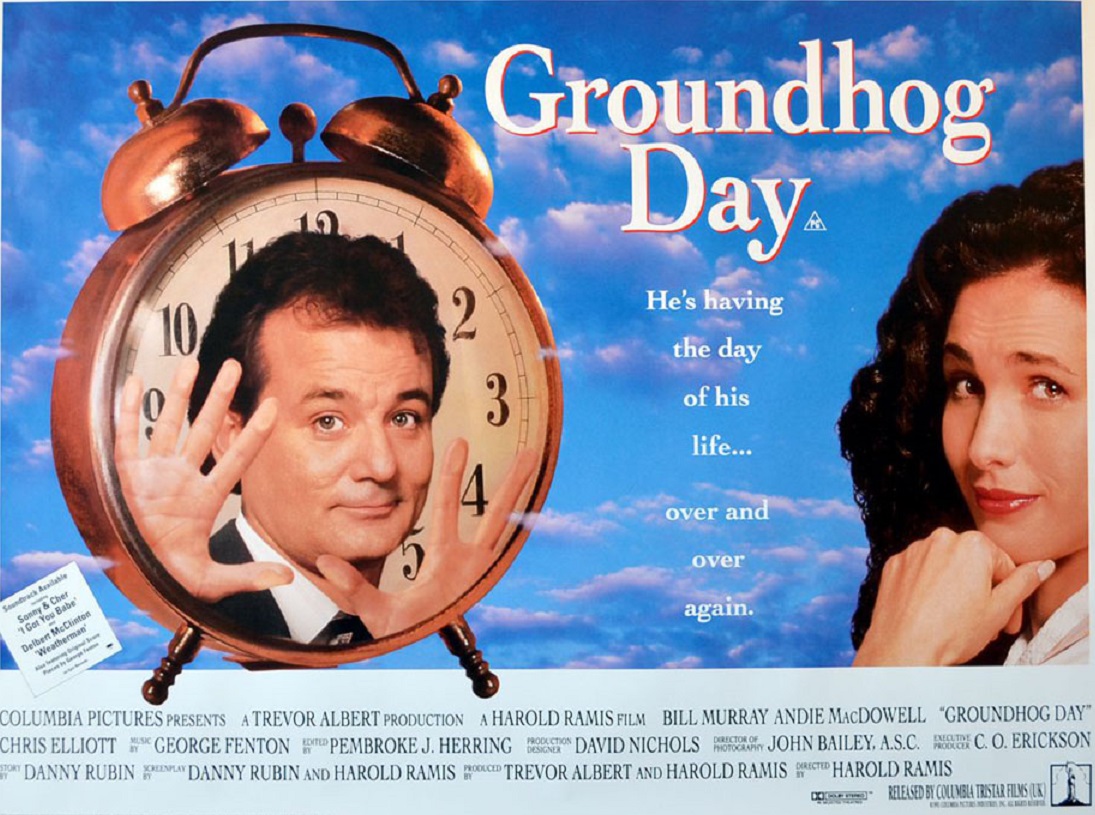 Reposted from The Patient Path February 3, 2015

My favorite part of the movie is near the end, when Phil (also the groundhog’s name) Connors finally gets it and starts living—and giving—in the ever-present moment. He hasn’t yet escaped the time warp he’s found himself in; but he has accepted his fate and lives a perfect day that only infinite re-dos and learning the ultimate lesson could make possible. And yet . . .

What is a “perfect” day? The message of the film is that this Scrooge-like guy learns about becoming his best self through genuine interest in and compassion for others—all with a comic and romantic twist (not unlike Bill’s other redemption movie, Scrooged). His reward for a lesson well learned on February 2nd? February 3rd.

But on the other side of the screen, we don’t get infinite re-dos. We need to learn as we go through time, not when we’re stuck in an endless loop. So how do we learn to live a “perfect” day on February 3rd after learning the lessons of our own February 2nd?

My personal February 2nd, so to speak, was in 2014. At this time last year, I was in the middle of my vaginal radiation treatments (brachytherapy) following a total hysterectomy for uterine cancer on December 13, 2013. And I was still in the “glow” of having survived a brush with fatality and having learned my lesson that all moments of life—even my life, which I have not always valued—are precious, if not eternal.

But what if we can’t unlock all of the secrets of the universe? (Who knows—maybe it’s only one secret.) These thoughts took me back to part of the lyrics of the 1967 song by the Youngbloods, “Get Together,” which I always thought held the deepest human secret:

In an awesome and happy coincidence, a quick search for the lyrics took me to the February 3, 2015, post on the Huffington Post blog, “The Third Metric,” where the song is featured today: “Daily Meditation: Get Together.” Such coincidences seem to point to a cosmic connection, one that I don’t understand. Yet these occurrences whisper to me that perhaps we do hold a key that unlocks the secrets to at least our private universe.

In the afterglow of that “Whew! Narrow escape” feeling post-op and post-radiation last year, I am still figuring out how to incorporate the lessons of my February 2nd into February 3rd—my reward for having survived. Learning how to do this will require me to be awake, aware, and appreciative in all the days that follow until I run out of them.

On this February 3rd, as I see welcome sunlight turning ice into crystals on the bare limbs outside my window, I guess it is enough for me to realize that aftermaths and interims are just as important as great events. Or maybe they are the great events. Life is still happening in an amazing way even when we can’t quite feel the miracle of it after the emergency or major event has melted into the rest of our experience.

Life transitions often feel shallow, muddy, confusing, unfocused, unimportant. But without the respite from urgency that we experience during exciting or traumatic times, we wouldn’t have the chance to dive deeper into our own being. These times spent in semi-mist may actually be mystical. Change is creative. So transition isn’t really a dark place to be feared or avoided, but a space offering a chance to learn and become your own next great thing. As earth transits around the sun, transition is how we experience time . . . and all the times of our lives.

Alone in my personal space, I will celebrate February 3rd, knowing that the ice crystals will become leaf buds . . . in time. I hope you will have a quietly wonderful February 3rd, too.